Nothing like honest feedback. I was so happy we finally got something cooking in Pyhon, that I sent it out to couple of people, asking (hoping) for immediate feedback. I failed to provide the full context of PMA.python though. Therefore, here’s one response that I got back:

So there’s obviously a couple of assumptions (leading to misconceptions) about PMA.python that are really easy to make, specifically:

Aaargh, we single-handedly just tipped the balance of power in the Universe!

But on more serious note:

I hope we successfully prevented people from bumping into 1) by providing additional verbiage in our package description on PyPI: 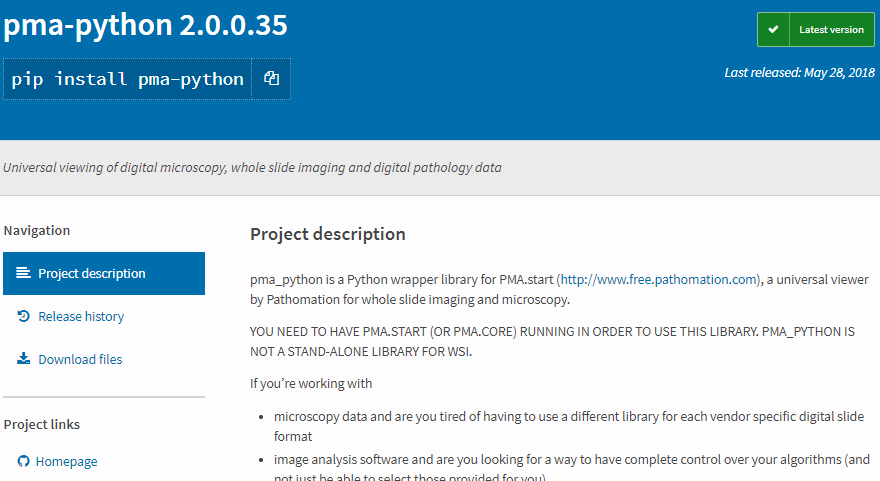 As for 2) we don’t think this is the case: Downloading a .exe-file and running it is about as easy as we can make it for you. Due to the nature of the software however, the user that installs the software will need administrative access to his or her own computer.

Finally, there 3). We know and we acknowledge the existence of the Linux-community. Unfortunately, porting PMA.start to Linux is not a trivial thing to do. And so, for now, we don’t. We don’t have the resources for that, and we’d rather offer stable software for a single OS, than an average and mediocre  product that nevertheless runs on both. If you’re tied to Linux and require WSI processing with Python, you’ll have to stick with OpenSlide for now (which also requires a separate library to connect to; there simply isn’t a native WSI library for Python).

By the way: the argument actually only partially applies. We offer a commercial version of PMA.core that is not limited to just listening to incoming requests on localhost. PMA.python then can be installed on a Linux datacenter and be used to communicate with the PMA.core instance that hosts the digital slide / tile data. In fact, this is exactly the approach that is being used at CellCarta, Pathomation‘s parent company.

That being said, we really appreciated the honesty of the poster. The point is: while it’s great to receive positive praise (PMA.start now has about 150 users per month; these can’t all be wrong), it’s the negative criticism that helps you become better and prevents you from becoming complacent.